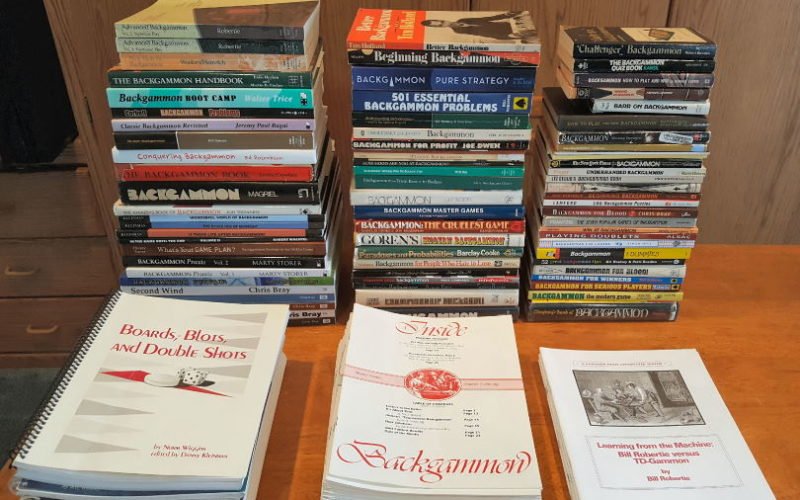 The Backgammon Guide carried out Research to find out which Backgammon Books are Most Frequently Recommended by Experienced Players. The results are Presented Down Below!

A must-have, often referred to as the backgammon bible and way ahead of the field in terms of the number of recommendations. This clear and well written book was the first to really explain the game of backgammon well. Sets out all aspects of the game in an easy digestible format with excellent diagrams. Still recommended for both beginners and experienced players.

First of several books in the top 10 by the former world champion player. The two volumes of Advanced Backgammon cover ‘positional play’ and ‘technical play’ respectively. As the name suggests, these are not for novices, but have become standard reading for more experienced players.

Presents the reader with 501 situations that will build a comprehensive understanding of the game. Aimed at players from beginner to expert level.

For intermediate and advanced players. Over 100 difficult positions are analysed and possible solutions discussed in detailed but with an easy conversational style. Teaches you the thought processes that will improve your whole game.

Known for his quirky style of writing and deep theoretical analyses, Kleinman has written many of the best selling backgammon books around. This book gives detailed and sometimes complex mathematical explanations of many features of the game. He also goes into the psychological aspects of play and looks at various cheating strategies that players should look out for. One for those who like technical analyses.

The author used the ‘Snowie’ program to reanalyze some of the backgammon problems covered in the classic texts. He updates/corrects previously given advice to incorporate the insights now available through use of bots. Considered essential reading for serious students of the game.

Some see this as the new bible to challenge Magriel’s classic book as solid introduction to the game. Trice provides excellent guidance on all aspects of backgammon, including the role and influence of computer ‘bots’ on the modern game. Particularly aimed at beginners but contains plenty for more experienced players.

This highly regarded book is aimed at advanced players keen to improve their game. By an in-depth analysis of bot play Robertie identifies four principles from which to build winning Backgammon strategies in the modern game.

Aimed at intermediate players who already have a grasp of the basics. The book offers clear and well laid out information and runs the reader through a set of positions, explaining how top players would handle them. Great book for building more advanced knowledge and strategies.