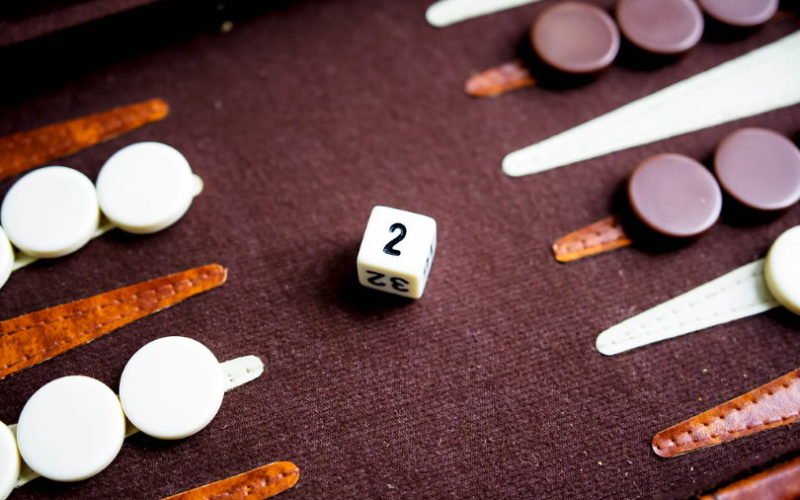 Find out how gambling occurs within the game of Backgammon in the article below!

Backgammon is played as a series of games, with the winner of each game earning one point. The overall winner is the first to reach a set number of points, say 5. So in this example, the first to win 5 games takes the crown.  Alternatively there may be a set time limit or a set number of games and the person with the most points at the end wins.

If you want to play for money you can either set a fixed stake for each game, or for the match, both players put their money down and the winner takes the pot, or you can agree a monetary value per point, so that the more points the winner gets, the bigger their prize.

Seems straightforward? Yes indeed, but this simple system is spiced up by the addition of the ‘doubling cube’ which brings a exciting gambling element to the game.

The doubling cube is used to raise the stakes in an individual backgammon game. The stakes may be points or a sum of money, depending on the type of game being played.

The doubling cube looks like a large dice but with the numbers 2, 4, 8, 16, 32 and 64 on its faces. It is initially placed in the middle of the bar with the ’64,’ face up, though its actual value at the beginning of the game is 1 (there is no 1 face). As long as it stays in this position the stakes remain at their original level.

If you reach a position in the game where you feel confident of winning, on your turn and before you roll the game dice, you can choose to turn the doubling cube to ‘2’ to announce a double.  This challenges your opponent to double the stakes of the game. The other player must now make a decision: either accept the double and continue the game at a twice the stakes, or refuse the double and concede the game for its current value.

If your opponent accepts the double they take control over the cube. The option to use the cube now rests with them. If at some point they feel that the game has turned in their favour they can ‘redouble’, turning the cube to ‘4’. The decision is now yours as to whether you will accept the re-double and take over the cube, or concede the game.

Control of the doubling cube is passed between the players in this way with each given the option to ‘redouble’ at any time before they roll the dice.

So the stakes increase 1-2-4-8-16-32-64 with each use of the cube. If it is at, say, 16 then the stakes are now at 16 times the original value. The doubling cube is really just used to keep track of the enhanced value of the stake. (Incidentally, whilst it is customary to use a doubling cube, in actual fact the process of doubling can occur without one. If a cube is not available you can just keep a written record of the stake value.)

If a player declines a double or a redouble they concede the game immediately and must pay winnings to the other player at the last doubling value that was accepted.

The importance of the doubling cube is particularly apparent if you get gammon or backgammon:

The Beaver Rule – and other animals

The ‘Beaver’ rule may often be used in money games, though not in match-play or tournaments.

Normally, when a player announces a double they lose control of the doubling cube.  If the ‘Beaver’ rule is being played, the player to whom the double has been offered can opt to immediately announce a redouble and still maintain control of the cube. This is called a ‘beaver’.

In some circumstances the players may agree to other animals being allowed in the game! This works as follows:

The Crawford rule is another option which can be brought into a game of backgammon. This states that if either player is just one point away from winning the match, the next game is played without the doubling cube. If the match is still not over after that game the doubling cube comes back in use.
The reason for this rule is that the weaker player is inclined to simply double and redouble because they have nothing to lose. They are seen as having an ‘unfair’ opportunity to use the doubling cube to snatch victory against the run of play.

This optional rule is sometimes used in money games. It states that a backgammon or gammon may not be scored as such once the doubling cube is in play. This is to avoid the possibility of one player taking a huge number of points in one game and skewing the match to an excessive degree