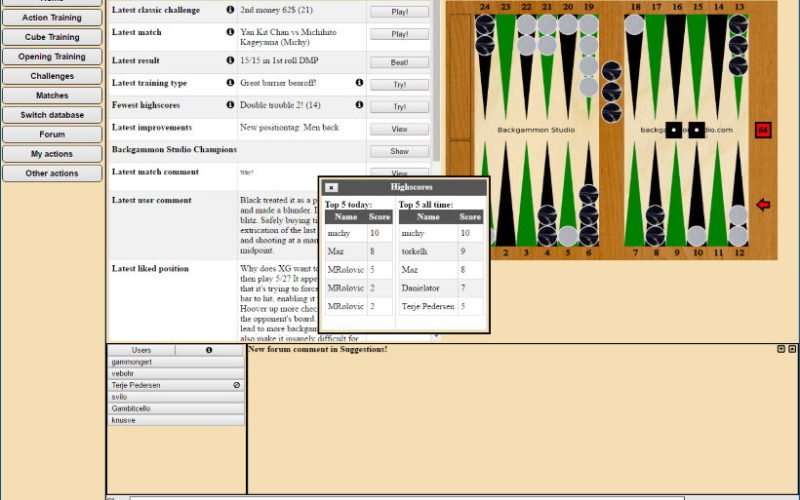 Online Backgammon has Become Incredibly Popular – All thanks to 1990’s “FIBS”!

It was created by Andreas “Marvin” Schneider, and has been maintained since 1996 by Patti Beadles. Anyone with access to the internet can create a username and play for free. FIBS caters to a strong international community of Backgammon players.

Other game related commands are available by typing the appropriate command. The first graphical user interfaces for FIBS were developed in 1994; FIBS/W for Windows and MacFIBS for Mac OS. Graphical interfaces continue to be developed for most major computing platforms, however telnet remains to be the underlying protocol for FIBS. This allows anyone with access to the internet to log into FIBS regardless of platform.

Bots have been developed, some based on neural net programs like gnubg, Jellyfish, TD-Gammon, and Snowie, to allow human players to compete with these computer programs on FIBS and to analyze these programs’ performance in real-world play.

Gerry Tesauro of IBM’s Thomas J. Watson Research Center wrote TD-Gammon, noted in Scientific American as the first expert-strength Backgammon program. This is one way FIBS has served as an experimental platform for the advancement of computer science and continues to do so.

FIBS supports communication between players via text messages using the “shout” command which broadcasts to all players, in-game using the “kibitz” or “whisper” commands, and privately using the “tell” command.

FIBS is largely unmoderated; its sysop typically tends to technical issues with the server. The “shout” command was initially implemented as a way for a player to find an opponent but has developed into a method of communicating with the general FIBS population.

Profanity is tolerated but usually frowned upon by regular community members. Behavior on the server is largely unpoliced, however users usually follow the fundamental rule of all social spaces. On occasion, the sysop has stepped in and blocked or banned extremely disruptive users.

All users have a range of options to filter the amount of text messaging they receive from ignoring troublesome users (with the “gag” command) to fully blocking receipt of all “shout” messages (using the “toggle silent” command).