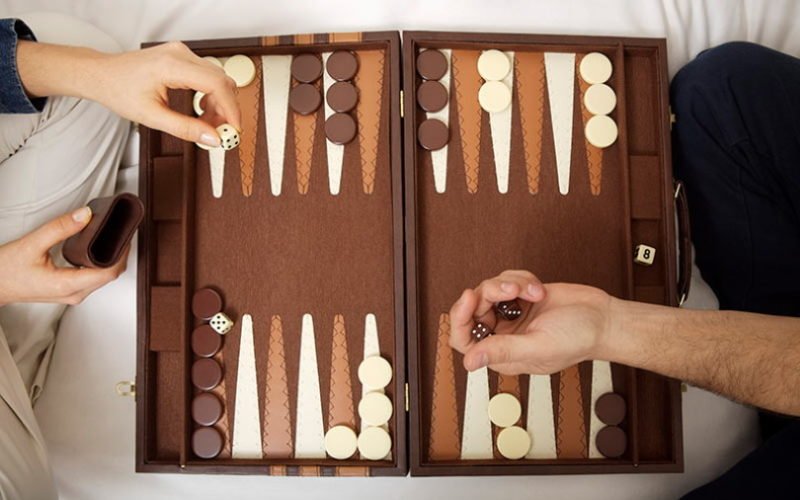 Backgammon is a Simple Game, but there are still Lots of Different Winning Strategies

Backgammon has an established opening theory, although it is less detailed than that of games like chess. The tree of checker positions expands quickly because of the number of possible dice rolls and the moves available on each turn.

Recent computer analysis has offered more insight on opening moves, but the midgame is reached quickly. After the opening moves, backgammon players frequently rely on some established general strategies, and will combine and switch among them to adapt to changing conditions as a game unfolds.

The Running Game – Stay Ahead

The most direct and sometimes the most successful strategy is simply to avoid being hit, trapped, or getting into mutually blocked stand-offs. The running game describes a strategy of moving as quickly as possible around the board, and is most successful when a player is already ahead in the race.

The Holding Game – All Offensive

A holding game is a strategy wherein a player keeps a point high in his opponent’s board or on his opponent’s bar point, as the game progresses. The player may gain an advantage by hitting an opponent’s blot from the held point, or by rolling large doubles that allow the player to advance both checkers and begin a running game.

The Priming Game – Full on Defense

The priming game involves building a wall of checkers, called a prime, ideally covering six consecutive points. This obstructs opposing checkers that are behind the blockade. The prime is usually built somewhere between the 11-point and the 2-point, and then shuffled into the home board as the game progresses.

A blitz describes a strategy of closing the home board as quickly as possible while keeping one’s opponent on the bar. Because the opponent has difficulty re-entering from the bar or escaping, a player can quickly gain a running advantage and win the game.

A backgame is a strategy of placing two or more anchors (points with two or more checkers) in one’s opponent’s home board, while building a prime in one’s own home board. The anchors obstruct the opponent’s checkers, and create opportunities to hit them as they move toward the home board. The backgame is generally used only to salvage a game wherein a player is already significantly behind; using a backgame as an initial strategy is usually unsuccessful.