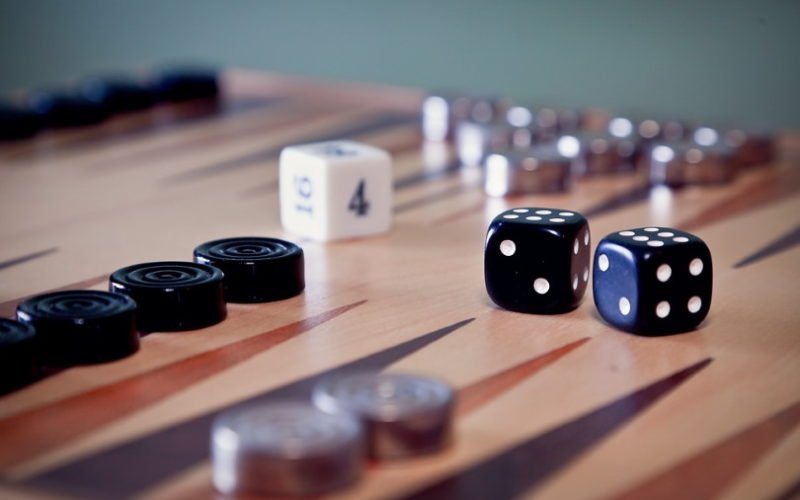 The Backgammon Rules are Simple, but Newcomers might Need some Help. Find the Rules Below!

The objective of backgammon is to move all of one’s own checkers past those of one’s opponent and then remove them from the board. The pieces are scattered at first and may be blocked or hit by the opponent. Because the playing time for each individual game is short, it is often played in matches, where victory is awarded to the first player to reach a certain number of points.

Each side of the board has a track of twelve long triangles, called points. The points are considered to be connected across one edge of the board, forming a continuous track analogous to a horseshoe, numbered from 1 to 24. Each player begins with two checkers on his 24-point, three checkers on his 8-point, and five checkers each on his 13-point and his 6-point. The two players move their checkers in opposite directions, each from his own 24-point toward his 1-point.

Points 1 to 6 are called the home board or inner board, and points 7 to 12 are called the outer board. The 7-point is referred to as the bar point and the 13-point as the mid point.

At the start of the game, each player rolls one die, and the player with the higher number moves first. The players then alternate turns, rolling two dice at the beginning of each turn.

After rolling the dice a player must, if possible, move checkers according to the number of pips showing on each die. For example, if he rolls a 6 and a 3 (noted as “6-3”) he must move one checker six points forward, and another checker three points forward.

The same checker may be moved twice as long as the two moves are distinct: six and then three, or three and then six, but not all nine at once. If a player rolls two of the same number (doubles) he must play each die twice. For example, upon rolling a 5-5 he must move four checkers forward five spaces each.

A checker may land on any point that is either unoccupied or is occupied only by a player’s own checkers. It may also land on a point occupied by exactly one opposing checker; such a lone piece is called a blot.

In the latter case, the blot has been hit, and is placed in the middle of the board on the bar, the divider between the home boards and the outer boards. A checker may never land on a point occupied by two or more opposing checkers, thus, no point is ever occupied by checkers from both players at the same time.

To speed up match play and to provide an added dimension for strategy, a doubling cube is normally used. The doubling cube is a 6-sided die marked with the numbers 2, 4, 8, 16, 32 and 64. If a player believes his position to be superior he may, before rolling the dice on his turn, double, demanding that the game be played for twice the current stakes.

The doubling cube is then placed with the 2 side face up to show that the game’s value has been doubled. His opponent must either accept the new stakes or resign the game immediately. Thereafter the right to redouble belongs exclusively to the player who last accepted a double. When this occurs, the cube is placed with the face of the next power of two showing.

The game is rarely redoubled beyond four times the original stake, but there is no theoretical limit on the number of doubles. Although 64 is the highest number depicted on the doubling cube, the stakes may rise to 128, 256, 512 and so on.

In money games, a player is often permitted to beaver when offered a double, doubling the value of the game again, while retaining possession of the cube.

The Jacoby rule allows gammons and backgammons to count for their respective double and triple values only if there has been at least one use of the doubling cube in the game. This encourages a player with a large lead in a game to double, possibly ending the game, rather than to play the game to its conclusion in hopes of a gammon or backgammon.

The Jacoby Rule is widely used in money play but is not used in match play.

The Crawford rule is designed to make match play more equitable for the player in the lead. If a player is one point away from winning a match, his opponent has no incentive not to double; whether the game is worth one point or two, the outcome of the match is unaffected.

The doubling remains in the middle, with both players having access to it, and the Jacoby Rule is still in effect. Again, automatic doubles are common in money games. but they are rarely, if ever, used in match play.